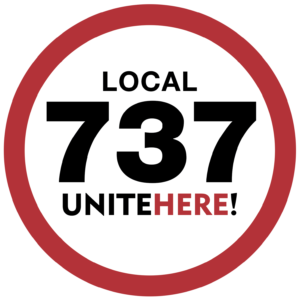 The Trump administration left the island to fend for itself. Aid was delayed. It took months to restore electricity and water. A mass migration of Puerto Ricans to the U.S. mainland followed, disrupting lives and splitting apart families.

“After Maria destroyed my home, I was forced to leave the island and migrate to Orlando,” said Sofia Ortiz, a Disney Housekeeper. “Trump turned his back on Puerto Rico in 2017 and now we’re going to make sure his presidency ends this year.”

“I am disgusted by President Trump’s cynical attempt to manipulate and take advantage of Puerto Ricans,” said former Congressman Luis Gutierrez. “I can’t wait to be on the ground with UNITE HERE in Orlando making sure Puerto Rican voters make Trump a one-term president!”

UNITE HERE is engaged in a massive statewide voter mobilization campaign ahead of the November election. Hundreds of volunteers and paid canvassers are making phone calls, knocking on doors and using new mobile technology to turn out co-workers, family and neighbors to vote on November 3rd.